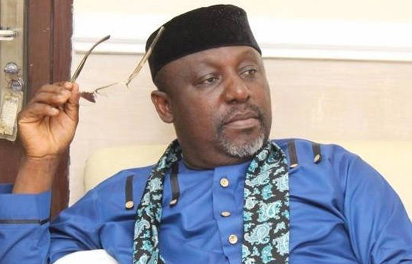 Gov. Rochas Okorocha through his commissioner for information has defended his recent widely unpopular and inhumane decision to tax all Imo state adults N3000 despite his bastardization of the economy of tve state.

Read the press statement he released below:

1. Firstly, it is acknowledged that this is a decision of Imo State Government backed by relevant and extant CGC and Autonomous Communities Laws in Imo State.

2. Out of abundant caution, it must be accentuated and underscored that creation and recognition of Autonomous Communities in Imo State beginning from the 1978 Imo State Traditional ?Rulers and Autonomous Communities (TRAC) Law as variously amended has always been predicated on a number of stringent conditionalities some of which include contiguous land mass, large population and viability measured through abundance of leviable adults.

All the relevant amendments to Imo State Traditional Rulers ?and Autonomous Communities (TRAC) Law through the civilian regimes of HE Mbakwe, HE Udenwa, HE Ohakim and till date have always retained these conditions without exception.

In other words, no autonomous community can be created without population made up of leviable adults.

3. The Government decision to impose Adult Community Development Levy of N3000 on all leviable adults in our respective autonomous communities is not a recent decision and has no political undertone as it is for overriding public interest.

4. The letter of the Honourable Commissioner For Community Government, Culture and Traditional Affairs dated 3rd April 2018 under reference is only reiterative and demanding compliance.

Adult Community Development Levy of N3000 was a product of reasoned, long standing, mutual and beneficial decision between Government and the Community Government Councils (CGC) led by Ndi Eze to fastrack rural development.

5. Implementation of this autochthonous decision contained in this recent reminder letter under reference has been ongoing since 2017 with varying degrees of compliance by different autonomous communities.

7. When evidence of payment is presented to Government, Government will in turn subvent each complying community with the sum of Four Million Naira totalling Ten Million Naira to be administered by the respective CGC for its rural development purposes.

8. Collection, warehousing and disbursement of this Adult Community Development levy is solely by the CGC of the autonomous communities and never by Imo State Government or its officials.

9. Many Autonomous Communities have started complying by opening their own Bank accounts in their chosen Banks and in the names of their authorised signatories.

10. Many Autonomous Communities have also been collecting this development levy without qualms.

It is public knowledge that during the certification exercise of thousands of beneficiaries of Rescue Mission Free Education in Tertiary Institutions in 2017, many communities used that window to raise this levy from leviable adult parents and guardians and are keeping them.

11. This Autonomous Community Adult Development Levy is neither tax nor double taxation.

The concept of development levy is not new and unknown to development conscious Imo people.

It is *”Utu imepe Obodo”* and government is merely giving it added impetus via the attractive matching grant of Four Million Naira.

12. Leviable adult members of our Autonomous Communities are strongly advised to comply in terms materially and fully disclosed in the said letter by the Honourable Commissioner For Community Government, Culture and Traditional Affairs as it is in the overall best interest of us all.

Imo Must Be Better.